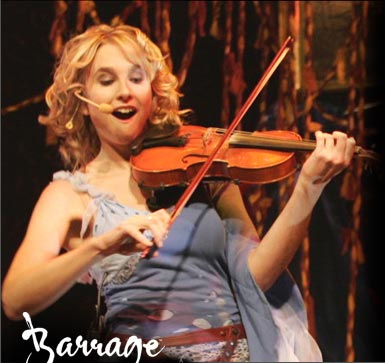 I grew up on a farm north of Auckland, New Zealand and was home-schooled by my parents for most of my education. This allowed lots of time for string instruments and horse riding. The emphasis was always on classical music, although I was encouraged to improvise from a young age. I started learning the violin and piano at the age of four then picked up recorder and saxophone a few years later. Classical violin was my main instrument though and I was lucky enough to perform as soloist with several different orchestras in New Zealand.

Financially, I supported myself during my honours degree in Performance Violin by playing part time in the Auckland Philharmonia Orchestra and also by playing Irish fiddle in various Irish pub bands in and around Auckland.

Whilst growing up, I always attended folk festivals with my father and developed a love for Celtic music. I spent a year playing regularly five nights a week in pubs whilst juggling my classical commitments and teaching. I also like to concentrate on writing my own music! I absolutely adore performing and get a huge kick out of dancing around on stage. Every second that I’ve spend rehearsing and performing with Barrage has been an absolute buzz. The music is totally inspiring and I’m lucky enough to be working with the best group of people ever! As long as I’ve got a bit of time to hit the gym, go horse riding and jump out of an airplane every now and then, I’m happy. Thanks for your interest and I hope to see you after a show soon!