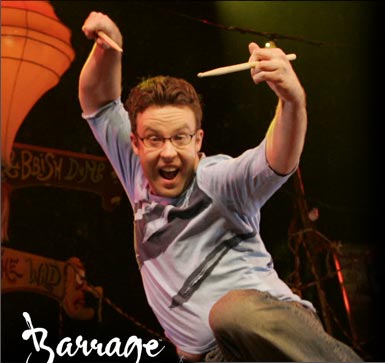 Jonathan was born in Winnipeg, Manitoba and raised in Regina, Saskatchewan. He began playing the drums at the age of nine and progressed through the Regina Lions Junior Band and the music program at his high school, Campbell Collegiate. Ultimately, his interest in jazz led him to enroll in the Jazz Studies program at McGill University from which he graduated with distinction in 1999. In 2002, Jon completed his Master’s in Jazz Studies at McGill University where he studied jazz drumming, improvisation and composition.

Recently, Jon was the recipient of a fellowship from the Kennedy Center for the Performing Arts and attended the “Betty Carter Jazz Ahead” residency in Washington, D.C.. Along with twenty other distinguished young jazz artists, he was featured with such jazz icons as Terence Blanchard, Eric Reed, Winard Harper, Curtis Fuller and John Clayton.

In January 2003 Jon released his debut CD, “McCallum’s Island” featuring his quintet. The CD contains an exciting collection of his original compositions and its release was followed by a twenty-day tour of Western Canada. Jon’s quintet recently performed at the 2003 edition of the Montreal International Jazz Festival and was nominated for the General Motors Grand Prix du Festival (awarded to the most outstanding Canadian group).

Some of Jon’s favorite drummers also include today’s modern masters who he has either seen perform live or studied with privately. These contemporary influences include Matt Wilson, Carl Allen, Lewis Nash, Billy Drummond and Joe Farnsworth. Jon is also influenced by the many traditions of ethnic musics from such places as Cuba, Brazil, West Africa, India, North Africa and Ireland.