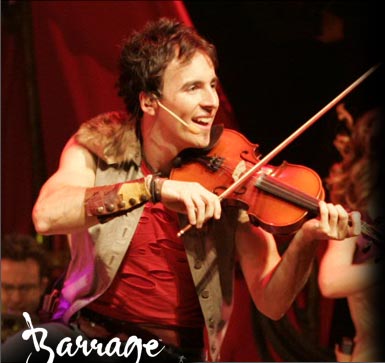 I was first introduced to the violin at the age of four in infant school. After studying the Suzuki violin method for about eleven years, I managed to become a student of Malcolm Leyfield who has been my tutor and mentor ever since. I also joined and eventually lead the Salford Youth Orchestra and managed to get my first experiences of touring with them. However, for a few years afterwards, I lost my direction and interest in playing and it was here that I discovered the guitar and drums and, subsequently, Pop, Rock and Punk music. I couldn’t see myself making a career playing the violin and I now think I was definitely not going to make one from Rock judging by the way I played the drums. However, these new styles of music provided me with a chance to perform in really energetic atmospheres. Soon enough I realized that I was being a little stupid by throwing away something I had worked hard on for so many years and so I began to play my violin again. I definitely think that without my experience playing in bands, I would never have discovered the energy needed to perform in Barrage.

I can’t quite pin down my musical influences exactly because I enjoy many different styles. Bands that I keep coming back to are Supergrass, Ben Folds Five, the Police, Pearl Jam, the Beatles. Basically, if it stirs some kind of emotion (especially a feel-good kind) then I like it! Also, I can’t rule out the influences and ideas I get from rehearsing and performing with the rest of the group. Everybody puts in so much energy it’s hard not to let some of it rub off on you.

One of my favorite hobbies is Kung Fu. It was something I had always wanted to do from a young age but my parents would never allow it. My Mum began to study Chen style Tai Chi around 1997 and would come home regularly with a new technique or throw and try them out with me. After that, I found myself a teacher of Northern Shaolin Wushu and now I can defend myself around the house.